Community is a fundamental part of our everyday lives and is important in ways that we often don’t think of or can’t imagine. Yet it’s almost certain, that at some point, your community of friends, family and neighbours would have had a positive impact on your life.

Helping In The Community 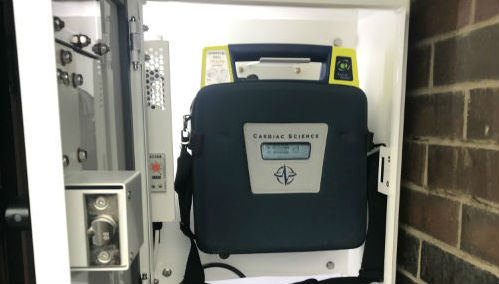 Being associated with the local community and giving back where possible has always been important to the team at FPM. David, one of our employees, has been volunteering and been on hand at events as part of the St John Ambulance service or almost 20 years. As a business we are more than happy to support the local community in any way that we can and over the last couple of months we’ve done just that. But sometimes the simple jobs turn out to be anything but…

The Holy Ghost church in Luton has been part of the local community since it first opened its doors in 1967. As with any building, maintenance is all important and the parish has been actively fundraising to pay for some much-needed repairs.

There’s a large 3.7m projector screen in the church that is used sparingly. Unfortunately, the spring mechanism has broken, and it has been stuck down for a number of years. In a bid to help the church with their appeal, we opted to buy and install a new screen.

It sounds easy enough, but when you’re dealing with a 3.7m x 3.7m screen that has to be fitted 20 feet up, and the floor is on different levels, it’s anything but. The equipment had to be ordered from th US and once it arrived, its sheer size meant that we had to organise specialist transport.

As access was proving difficult, we had to source dedicated access equipment. In true spirit, once they realised it was for the local community, our friends at Magnito Tool Hire supplied the materials Free of Charge. Our team erected the two 6m mobile platforms and set about installing the new projector. Planned to precision, the install went like a dream. Unfortunately, the screen was faulty and during tests, it jammed! Which meant that we had to go through the whole process again some 6 weeks later when the replacement screen arrived. But as they say, it’s all in a day’s work!

We are pleased to say, though, that the new screen is now in place and fully operational.

Giving back, paying it forward – the sentiment may be the same but the level of generosity and the levels that some people go to never ceases to amaze.

Set up in memory of James Hursey, who died suddenly of cardiac arrest in 2015, Defibrillators  in Public Places, or DiPPs, as it is known, are dedicated to placing life-saving defibrillators into communities in a bid to increase the odds of survival for the 80,000 – 120,000 people who will suffer a cardiac arrest in a public place in the UK each year.

Working tirelessly and fundraising at every opportunity, their efforts are paying off and to date, 52 defibrillators have been placed in public areas.

DiPPs recently donated a defibrillator to Luton Town Football Club for installation at their training ground. In constant use, the training ground is also used by LTFC ladies and Crawley Green Sports Club.

Although we hope it will never have to be used it is reassuring to know that it is there.